The following paper describes the stall phenomena that occurs to the blades of a fan's propeller and explains its cause. To simplify the analysis, we are going to adopt certain assumptions that are described below:

What are Fans For?

A fan is an apparatus that converts electric energy into aerodynamic energy. Some of this energy is useful, other output energy is wasted energy like the air swirl at the fan's exit. We can get only two types of useful aerodynamic energies out of a fan, and these are:

This is the energy that will make the air flow across the cabinet filled with circuit board. Even the hot air surrounding the circuit boards that is not directly in the air stream is going to sense the pressure difference between the fan location and the exit of the cabinet which is at atmospheric pressure and move its way towards the exit, where it is (normally) cooler. Static pressure is a very powerful tool for "long distance cooling". This energy does not dissipate easily (unless your fan quits working and becomes a hole in your system instead). We measure static pressure in inches of column of water. To give us an idea, the static pressure that the atmosphere exerts upon us due to its weight is equal to approximately 407 inches of water.

The fan not only increases the air pressure behind it but also blows air and this air will cool anything that is near the fan's exit. After the first contact with the element to be cooled, say the circuit board, the particles of air crash with those elements and loose their kinetic energy in the form of turbulence and vortices. The kinetic energy is measured usually in cubic feet per minute (CFM) and is called a volumetric flow rate (not mass flow rate) which, by the way, does not change with altitude. A question arises at this point: to cool a system, do I want more volumetric flow or more static pressure? A good question indeed, answered in other engineering paper. To measure the energy output of a fan, we want to find out how much static pressure alone can the fan exert upon the air (shut-off condition) and how much kinetic energy alone can the air through the fan develop (free-delivery condition). These two pieces of information can be found in the extreme regions of the so called characteristic curve. See figure 1.

The way to prove the performance of the fan is to show a characteristic curve from the shut-off condition (no flow) to free delivery (where both sides of the fan are at atmospheric pressure). Even though these two extreme conditions are unrealistic in real life fan usage, they describe the two extreme conditions of electric energy conversion available to the user. The user will be using a combination of both types of energy. The relative percentage of each type of energy will be dependent on the impedance of the system to be cooled by the fan or group of fans. The larger the impedance behind the fan, the larger the percentage of static pressure relative to the kinetic energy to be exerted by the fan and used through the system. Let's now study the flow characteristics of the two extreme cases to understand what happens to the fan's blade regarding the direction of the flow it sees.

Note that while the velocity vector is horizontal the airfoil is inclined at a certain angle of attack with respect to the horizontal. When meeting the blade, the flow of air cannot follow the contour of the blade's airfoil and air detachment from the airfoil surface occurs. This is known as stall.

At this point we have to consider that, as there is no flow at the exit side of the fan, the pressure build up is very high. The air senses this pressure and chooses to stay on the inlet side of the fan. More on this important issue later.

We know that at free delivery condition, both sides of the fan will be atmospheric pressure and the volumetric air flow rate across the venturi will be maximum.

At this condition, the observer is not only looking at the same in plane vector of 73.3 feet per second due to the tangential velocity of the blade (we have assumed constant RPM of propeller), but sees also the vector representing the incoming flow placed perpendicular to the venturi inlet area. This velocity, for a volumetric airflow of 235 CFM (typical value for a Patriot at free delivery) corresponds to 31.58 feet per second. In this case we have the in-plane velocity vector Vrot and a perpendicular Vaxial vector that when added together is giving us a relative velocity resultant (which the airfoil sees) which is more in line with the orientation of the airfoil as shown in figure 3.

In neither case the angle of attack is the ideal one but we can see that the aerodynamic condition at free delivery is much more favorable because it is more aligned with the airfoil. As we see, the ideal aerodynamic condition is nearer the free delivery condition than the shut-off condition. When moving towards the shut off condition the angle of attack increases in such a way that somewhere between these two points, separation of the flow occurs and a dip in the characteristic curve of the fan appears. Refer to figure 1.

The stall mechanism will be reviewed in four different ways:

It is to be understood that all these viewpoints occur simultaneously at the stall.

Some conclusion can be obtained from this first stall mechanism: This pulling force that creates the detachment of the air flow from the surface is dependent on the velocity of the particle and the radius of curvature of the turn. The larger the velocity and the smaller the radius of curvature, the larger the pull on the particle and larger the chance to depart from its intended path, around the blade's surface as depicted in figure 4.

A particle is traveling along the airfoil which at this point is thickening. While the thickness increases, the speed of the particle also increases, while at the same time the pressure decreases (due to Bernoulli's law). This is happening at the first part of the airfoil, where the thickness of the airfoil goes from minimum to maximum. This region is called a region of favorable gradient where the air is "sucked" by the airfoil because it keeps finding lower and lower pressure. After the airfoil's maximum thickness point, the inverse is true: the thickness decreases again, velocity decreases and most important, the pressure goes back up to the original atmospheric value, which means that the air particle sees in this other half of the trajectory an adverse pressure gradient. Higher and higher pressures are encountered by the particle as it approaches the trailing edge of the airfoil. This adverse pressure is presented by the particle and it's reaction is a slow down and consequent separation from the surface and subsequent flow stall.

In these two viewpoints, we considered an isolated air particle flowing around the blade. Next, we will study the effect of a group of air particles and their influence on the stall.

In this case, a group of particles with an initial static pressure and kinetic energy travel along the surface of the blade, while substantial friction between particles and blade surface is going on due to the presence of viscosity. This friction diminishes the intrinsic energy contained in the particles and forms and layer of "sick" and low energy air called boundary layer. As the particles travel downwind, more of the energy is being dissipated in the form of heat which means that the boundary layer thickness increases. This lack of energy of the air particles will cause them to stop and stagnate, creating more accumulation of particles behind them and this obstruction will create separation of the flow of particles from the blade's surface. See figure 5 for a graphical representation of Bernoulli's law over the airfoil.

At this point we have reviewed stall mechanisms that are related exclusively with the internal aerodynamic conditions set by the fan's Venturi and propeller's blades. We are going to study now how external conditions affect the fan's performance and stall.

When we are increasing the impedance behind the fan, a static pressure build up proportional to this impedance takes place at the exit of the fan. Even though the fan blades are working hard, the air going through the blades starts to sense the rapid increase in static pressure existing at the fan's exit and choose not to keep going, and in doing so, the air particles separate and stall occurs.

This stall mechanism is there, regardless of how good the fan is designed. There is not much the aerodynamicist can do, unless he can convince everybody in the industry to diminish their impedance to its minimum (now you know what aerodynamicists dream of!)

Is the Stall Avoidable?

Of the four stall mechanisms, the fourth is the one that perhaps the most insurmountable of them all. So the question should be reformulated to: "Can the effect of the stall be reduced?"

This question is tricky and involves aerodynamic study of the effects, both theoretical and experimental, of low Reynolds numbers on flow behavior; as well as research on the effects of three dimensional flow. Research in this area is a challenge due to the fact that some limited stall avoidance can be possible but noise signature at this condition can be jeopardized. Some blade planform geometry modifications are presently being studied at Comair Rotron and seem to delay blade stall but more testing is needed to in order to study its effect on the normal operating condition and acoustical signature of the final product.

The stall region in axial fans is nowadays an accepted although undesirable phenomena in the industry. Comair Rotron is researching some solutions to change this. To partially avoid the stall region and at the same time avoid the increase in acoustic signature that accompanies this aerodynamically unstable region are our immediate goals. 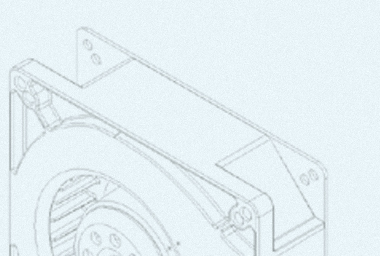